is running under normal condition, stator field and rotor magnetic field will be rotating in the same direction at synchronous speed. When sudden change in load across the alternator (stator) or change in the torque of turbine occurs, speed of the rotor falls back of synchronism with that of stator by some angle called as load angle. Once this happens, rotor starts to hunt or search for a new equilibrium position. However due to high inertia, rotor cannot achieve its final position instantaneously. The process of oscillation of rotor in order to achieve its new equilibrium position is known as hunting.

Basically, hunting is the swing in the speed of rotor when sudden change in the load is carried out. These oscillations will become violent and results in the instability of machine. Hence it is necessary to prevent hunting effect in alternators.

How can we reduce hunting effect in Alternators?

Although we can’t overall prevent hunting in alternators but we can reduce the effect of hunting to a great extent by using damper winding.

In order to reduce hunting effect in alternators, damper winding is provided on the pole shoes of salient pole machines

. It consists of low resistance copper or aluminum bars inserted in the slots made under the pole shoes. Copper bars are short circuited at both sides with end rings. The below diagram will help you to understand the position of damper winding bars. 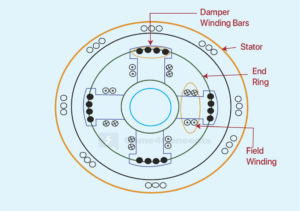 When load across the terminals of three phase alternator(stator) changes, speed of the rotor falls back of synchronism. Once the rotor deviate from synchronous speed, there will be relative motion between the damper winding and main rotor field. The relative motion will induce current in the damper winding. Damper winding is actually a path for the circulation of induced current when alternator operates at other than synchronous speed.

According to Lenz law, any induce current opposes the cause which produces it. Hence the direction of induced eddy currents

in damper winding is such that they tend to oppose the rotor oscillations.

, eddy currents are produced in it as it is made up of good iron material. The produce eddy currents act as damper. This is the reason that there is no need of damper winding in cylindrical rotor since non-salient pole rotor itself provides better damping.

Whenever electrical load connected to the alternator is varied, speed of the rotor falls out of synchronism with that of stator magnetic field speed. Thus, instability arises in machine and the resultant effect is called hunting. By using damper winding, we can reduce the effect of hunting and bring the alternator back to synchronous speed operation.

How does an Alternator Works ?

Difference between power and Distribution Transformer

1 thought on “What is Hunting Effect? Why Damper Windings are used in Alternators?”