The output power in practical real transformer is slightly less than input power since there are some power losses occurs within the transformer. Different types of transformer losses are as follows:

losses. The copper loss formula can be expressed as:

How can we reduce Copper Losses in Transformer?

If we reduce any of the term on the R.H.S, we can reduce copper loss in transformers.

Copper wire windings are made thick in order to reduce resistance.(Since resistance is inversely proportional to the area of cross section of wire).

Voltage is stepped up so that current can be reduced. In this way, the product of

is  reduced. This technique is generally used in large distance transmission. 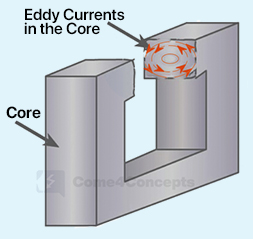 These losses occurs when the conductor (magnetic core of transformer) experiences changing magnetic field. If the mass of the core is highly conductive, eddy current losses are quite high since the resistance of material is very low in that case.

How can we reduce Eddy Current Loss in Transformer?

A= Cross sectional area of the wire. 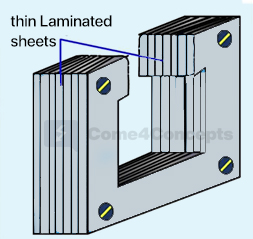 One more thing to be noted that the use of laminations is not required if the core of transformer is made up of highly resistive material like ferrite. Since the resistivity of the core material is itself quite high which will reduce transformer eddy current loss.

Stray losses occur due to the presence of leakage flux in the transformers. Leakage flux links with the metallic structural parts (i.e. tank ) and produce eddy current losses in them. Since they take place all over the transformer instead of one definite place, hence the name “stray” is given to them.

Magnetic core of the transformer is made up of ferromagnetic materials. These materials are very sensitive to be magnetized (i.e when magnetic field passes through it, they behave like a magnet).

Since every magnetic material has some domains in their structure. In normal condition, these magnetic domains(particles) move in arbitrary directions. When the core is subjected to alternating magnetic field, randomly moving domains began to align themselves in parallel with the magnetic lines of forces(flux). When applied magnetic source is removed, maximum number of domains goes back to their arbitrary state, but some of them remains in their new position. Due to these magnetic domains, the substance is still slightly magnetized. In order to neutralize this magnetism, we have to apply some amount of magnetomotive force(H=NI) in the opposite direction known as coercive force (see the below fig). That extra force applied is nothing but hysteresis loss.

Since the applied magnetic field in the transformer is alternating, there are reversal of cycles. Hence the domains present in the core material will change their directions after every half cycle. Due to the frequent changings of domain positions, there will be extra work done after every cycle. For this reason, there will be continuous consumption of electrical energy which is known as hysteresis power loss. The below diagram is the B-H hysteresis loop curve↗. 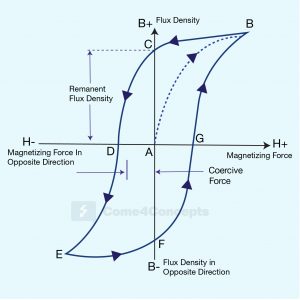 How can we reduce hysteresis loss in transformer?

Although we cannot prevent hysteresis losses in transformer but we can minimize these power losses to a great extent. Hysteresis losses occur in the core of transformer is directly proportional to the area of the hysteresis loop of the material. From the above figure, we can analyze that area cover under the BH loop is the power dissipated in the form of heat which is known as hysteresis loss. 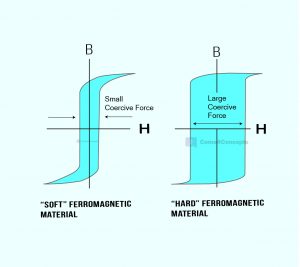 From the above discussion, we conclude that both hysteresis and eddy current losses depend on the magnetic properties of the core material used in the construction. Copper losses are current dependent and varies as the square of load current. Moreover, the percentage of dielectric and stray losses are very low as compared to the iron and copper losses so they can be neglected. Hence, we can write transformer losses in equation form as: