, it is important to know that why it is necessary to connect alternators in Parallel.

Why Alternators are Connected in Parallel?

Conditions for Synchronization of Alternator with infinite Busbar:

In order to synchronize the alternator with infinite busbar, following conditions must be met for proper parallel operation of alternators.

The rms terminal voltage of incoming alternator must be same as that of the running power system.

Phase angle between the voltage produced by incoming alternator and bus bar must be zero. In simple words, phase difference between both the voltages is zero (they are in phase with each other.)

Frequency of incoming alternator must be same as that of the bus bar frequency. 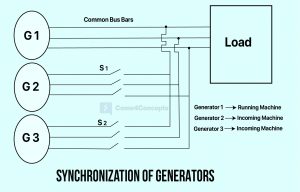 Advantages of Synchronization of Alternator:

Parallel operation of alternators maintains the reliability and stability of power supply. If there is a breakdown of one alternator, there will be no interruption in the power supply. Several units are connected in parallel to the bus bar (power grid) in order to withstand large variations in loads.

In a large power system, several generators are connected in parallel forms a system which is treated as an infinite bus. Any change in the operating condition of one alternator doesn’t cause any effect in the frequency and voltage of system. In other words, infinite bus maintains a constant voltage and frequency regardless of the variation in load or individual generator emf.

When two alternators are connected in parallel, change in the excitation affects the terminal voltage of alternators. However, this behavior of alternator differs when it is connected to infinite busbar.

Large number of alternators connected in parallel treated as an infinite bus whose voltage and frequency remains constant regardless of the variations in load. The purpose of synchronization of alternators is to share the load between multiple generators. Moreover, active and reactive power (KVAR) of  alternator

operating in an infinite bus is controlled by controlling the mechanical input power and field excitation respectively.