Slip ring induction motors usually have a wound rotor. It consists of laminated cylindrical core and carries 3 phase windings which are usually star connected similar to one on the stator. The below diagram shows the wound rotor along with its connections.

Working of slip ring induction motor is almost same as that of simple three phase induction motor. In case of slip ring motor, both stator and rotor have three phase windings. Rotor windings are connected to each other with slip rings. When alternating current is applied to the stator windings, they create a rotating magnetic field.  Revolving magnetic field cuts the rotor windings and induces an emf in the rotor coils according to the faraday law of electromagnetic induction. Since armature (rotor) coils are connected with a slip rings in a close electric circuit, current begins to flow. Now, current carrying rotor conductors placed in a magnetic field (produced by the stator) experiences a mechanical force. The mechanical force acting on the rotor conductor produces a rotating effect (torque) on the rotor which causes the motor to rotate. 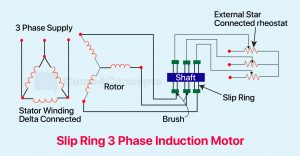 In order to know the rotor direction and speed of rotor, kindly read this article: Working principle of induction motor↗

At the start of induction motor, rotor is  stationary (Slip S= 1)↗. The relative speed of rotating stator field with respect to the stationary rotor is very high (i.e. synchronous speed). Rotor Frequency (Fr) is expressed as:

As slip S = 1(during the start of motor), hence

The rotor reactance (Xr) is given as:

(Putting the value of rotor frequency from eq. A)

From the above equation, we can say that rotor reactance is very large compared to its resistance at the start of motor (since rotor frequency is equal to the supply (stator) frequency ). However, it gets reduces as the motor accelerates to attain its specific speed.

Rotor reactance is an inductance effect which delays the rise of rotor current and makes it less effective to react with the stator current in order to develop torque. Hence high reactance makes the rotor current lags the rotor emf by large scale such that the phase difference between the current and voltage is very large. This simply result in low power factor and hence low starting torque of induction motor.

How can we achieve high starting torque in slip ring induction motors?

Mathematical expression of induction motor starting torque↗ is stated as:

Slip ring induction motors are used in applications where speed control is require for loads. Hence they are employed for driving loads like pumps, lifts, generators etc.

We can easily control the speed of slip ring induction motors.

Speed regulation of slip ring motor is poor when run with external resistance in the circuit.

Maintenance of motor is often required due to the presence of slip rings and brushes.

In case of slip ring induction motor, rotor copper losses ↗ are high due to which it has less efficiency.

That’s all. Hope this will help you.

How does an Alternator Works↗

What is Power Factor ? ↗