The term salient means projected outward. Hence poles of salient type rotor are projected out from the surface of core and houses the rotor field winding. 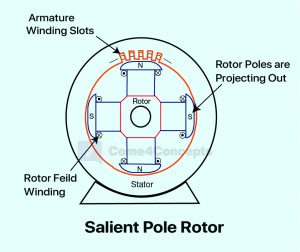 Construction of salient type rotor is not strong enough to withstand mechanical stresses due to which this type of rotor cannot run at higher speed.

Salient pole rotors are generally used in low and medium speed alternators having a speed (100-1500 rpm). These types of rotor cause excessive windage losses if driven at high speed.

Salient pole rotor has normally 4 to 60 numbers of poles .

Let’s understand the above discussion by the following example.

Assuming the desire fixed frequency is 50 Hz at synchronous speed of 100 rpm. Lets calculate the required  number of poles. Since

Putting the values, we have

Salient pole rotor has large diameter in order to have space for the large number of poles and short axial length.

Flux distribution is poor due to non-uniform air gap. Hence pole faces of the rotor are shaped in radial manner (can be seen in the above figure) so that the generated emf is of sinusoidal shape.

Because of non-uniform air gap, salient pole rotor produce oscillations during the operation.

Damper windings↗ are needed in salient pole rotor to damp out the rotor oscillations.

These types of rotors are generally used in hydel power plants since hydro turbines has low speed of operation. 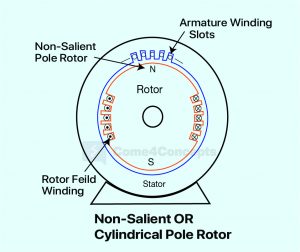 Non salient pole type rotors are smooth cylindrical in shape and have a number of parallel slots on its outer periphery.

Each of the slot has different number of turns and produce sinusoidal flux when excited.

Flux distribution is uniform due to which sinusoidal emf is obtained in the case of cylindrical pole rotor.

Operation is smooth and less noisy because of uniform air gap.

Since non-salient pole rotor are used in high speed alternators, hence small numbers of poles are required to get the fixed frequency ( f=Ns*p/120).

These type of rotors are smooth so windage losses are less.

Damper windings are not needed in non-salient type rotors.

These type of rotors are used in machines having ratings of 10kva to 1500kva.

Difference between Power and Distribution Transformer ↗