Before going to the explanation of core saturation in transformers, it is important to understand some important terms which are used in the article.

Magnetomotive force (Mmf) is the force which is required to set up magnetic flux in magnetic circuits. It is the product of applied current and number of turns in the coil .

Transformer core is made up of ferromagnetic materials. These ferromagnetic materials behave like a magnet when magnetic field passes through it. In order to produce magnetic flux, primary winding is energized by electrical source. Once primary winding is energized, current starts to flow through it. Flow of current in the primary coils produces magnetomotive force which is responsible for creating magnetic flux in the core and windings of transformer

. Hence Flux produce in the core depends on the magnetizing force.

The magnetizing force “H” is the magnetic field which magnetizes the transformer core whereas the value of magnetic flux density (B) determines how much magnetic flux is produced in the core material. 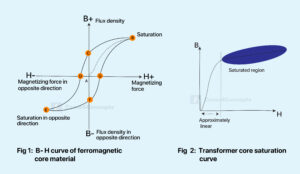 In the above B-H curve diagram, we can see that curve between B and H is linear up to certain point. Above that particular point, increase in magnetizing force “H” will not result in the increase of magnetic flux density “B” of the material. At that point, saturation region will start and core will starts to lose its electromagnetic property.

If you want to read B-H curve in detail, please read the following article: B-H Curve Hysteresis loop in Transformers

What will happen if the core of Transformer saturates?

If we applied excessive voltage at the primary, there will be high value of magnetizing current. Since magnetic field intensity (H) is directly proportional to the primary current. Hence large magnetizing current results in the higher value of H. When this happens, flux in the core reach the saturation point which is not desired.

are produced in the secondary winding output. The presence of harmonics will cause overheating and power losses in machine. It will also reduce the efficiency of machine and life of transformer is also affected. Hence it is necessary to operate the transformer below the saturation point.

How do we prevent core saturation in Transformers ?

Different materials have different B sat (saturation)values. Hence the value of maximum flux density (Bm) should be less than Bsat to prevent core saturation in transformers.

Moreover, transformer core saturation generally depend on “V/F”(voltage to frequency) ratio. If you want to apply high AC voltage, you have to increase the frequency in such a way that “V/F” ratio remains constant. In this way, saturation of core can be avoided.

How does an Alternator Works ?↗