As far as cooling of transformer is concerned, they are dived into two categories termed as Dry type transformers and Oil immersed transformers.

Transformers having rating up to 15MVA are of dry type and have the following cooling methods;

This method is generally used for small transformers having rating up to 3MVA. In this method, natural air is used for cooling the transformer.

This method is used for oil immersed transformers. In this method, natural convectional flow of oil is used for cooling. Transformer tank is filled up with insulating oil. Oil in the tank provides cooling as well as insulation to the core and windings of transformer. Heat produced in the core and windings transfers to the oil. By the principle of convection, heated oil flows in the upper portion of transformer tank while cold oil takes its vacant place in the tank. Hot oil in the upper portion of tank will dissipate the heat in the atmosphere by natural conduction.

In this way, oil in the transformer tank continue to circulate by natural convection(hot oil flows up and cold oil comes down to replace it causes circulate motion) and dissipate the heat in the atmosphere by natural conduction. This method is generally used for transformers having rating upto 30MVA. 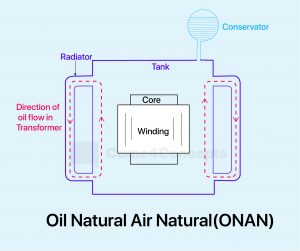 In this method, fans are mounted around the radiator and provides with automatic switching. When the temperature increases beyond a certain value, fans will be automatically switched on. The forced air produced by the fans takes away the heat from the surface of radiator and provides faster heat dissipation as compared to natural air. This cooling method is generally used for large transformers having rating up to 60MVA. 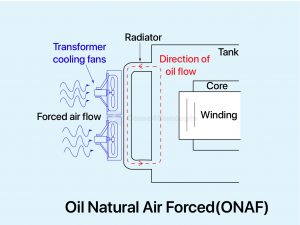 In this method, oil is forced to circulate within the external heat exchanger with the help of oil pumps. Oil is cooled down in the heat exchangers using air blast with the help of high speed fans. These fans are not being used all the time. During light loads, natural circulation of oil is sufficient for cooling of transformers. At higher loads, fans are automatically switched on by temperature sensing elements. This arrangement increases the efficiency of the system. This cooling method is generally used for high rating transformers used in substations. 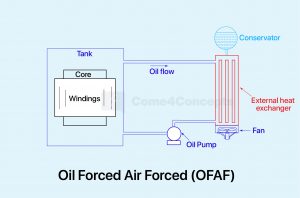 In oil forced water forced cooling system, oil is forced to pass through water heat exchanger by means of oil pump. Heat is dissipated in the water which is also forced to flow in the heat exchanger. Water is then sent to the other tank to cool in separate coolers. This cooling method is used for transformers having very large rating. 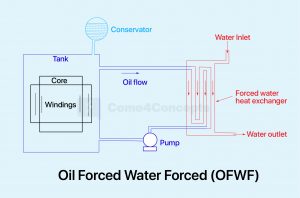