Before studying the Armature Reaction in DC Generator, it is recommended to read the working of dc generator

in detail. It will help you to understand Armature Reaction and its effect in DC Generator.

During no load condition, current passing through the armature winding is zero. In that case, the only magnetic field present in the generator is produced by the stator field poles known as main magnetic field. Magnetic field lines of the poles are uniform and symmetrical to the axis. 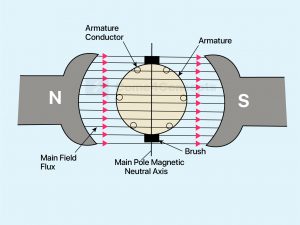 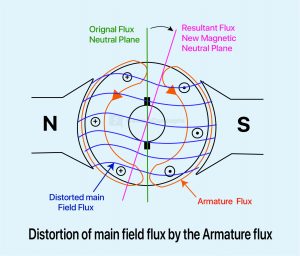 The axis where there is no voltage is going to be induced in the armature coil is called neutral zone (where main field flux is minimum or zero). Let assume that the coil is rotating under given set of poles. When the coil passes through the magnetic neutral axis, rate of change of flux or emf induced in the armature coil is minimum. Hence midpoint between the main field poles is called neutral zone (magnetic neutral plane).

What should be the position of brushes in DC Generator? 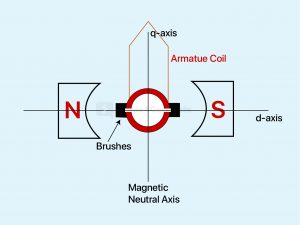 When the coil is along magnetic neutral axis ( induce voltage in the coil is minimum), segments of armature coil at that instant is getting short circuited at d-axis. In that case, short circuit current produce in the coil segments will be less since rate of change of flux is minimum at this point. This simply means that brushes should be place along direct d-axis. In all other positions, there is certain value of induced emf which will result in the flow of high short circuit currents in the coil segments and ultimately huge sparking. Hence brushes should always place perpendicular to the magnetic neutral axis or we can say along d-axis.

What will happen if neutral zone (magnetic neutral axis) has a induce voltage ?

If neutral zone (magnetic neutral axis) has a induced voltage, there will be circulating current in the coil which results in huge

losses. Circulating currents will also heat up the winding which results in huge sparking. Now, lets come to the effects of armature reaction.

The position of brushes should always be along d-axis in order to ensure good commutation. During no load condition, magnetic neutral axis is located between the mid-point of the field poles (orthogonal to the main field flux). Moreover, brushes are also perpendicular to the magnetic neutral axis.

The problem arises when generator is loaded. When dc generator is loaded, current flows through the armature coil due to which armature flux is produced and armature reaction takes place. Once this happens, magnetic neutral axis is shifted or changes its position due to the distortion of main field flux. Similarly, the position of brushes also varies. Hence there is need to shift the brush assembly ( should be perpendicular to the magnetic neutral axis) to avoid the flow of current in the coil.

In simple words, we can say that magnetic neutral axis position is changing continuously. In that case, it is difficult to place the brushes at one position (along direct d- axis). Hence armature reaction which is produced due to the load current is causing problem. 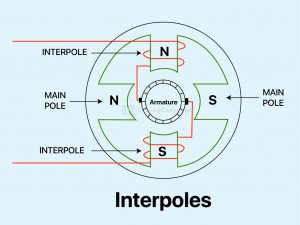 Flux created due to the stator field poles (main flux).

Flux produced due to the armature current flowing in the commutating poles (interpoles).

Moreover, since interpoles are connected in series with the armature. Hence any increase or decrease in armature current (during load varying condition) also results in the increase or decrease of interpole flux. In simple words, interpole flux completely nullify the effect of armature reaction for all values of load current. This will result in no induced emf in the armature coils at neutral axis. Hence no sparking as well as no circulating current in the armature coil takes place. Moreover, there is also no need to shift the brush assembly.

How does an Alternator Works↗