Alternator is basically an AC generator which converts mechanical energy into electrical energy in the form of alternating current at specified frequency. The term alternator is used since it generates AC power.

Stator is the stationary part of alternator. It consists of core which is fabricated in a frame made up of special steel plates. The core houses slots on its inner periphery. These slots carry armature coils which serve as the armature windings of alternator. A three-phase alternator (AC generator) has three set of coils each of them separated by 120 degree wrapped with same number of turns so that each of them have the same output voltage. These set of armature coils are put in the stator slots. 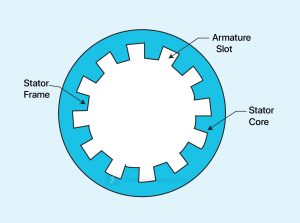 Function of stator in an alternator is to produce AC output voltage. Three phase stator windings are connected directly to the load. The magnitude of voltage induced in the stator windings depends on the rotating speed of rotor and dc field current. Stator coil output can be seen in the fig. shown below. 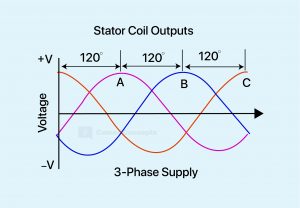 Rotor is the rotating part of alternator which carries the field winding. It is generally an electromagnet installed inside the stator. The rotor carries a field winding which is either supplied by external dc source through slip rings or by the dc power source mounted directly on the shaft of alternator.

Since the function of rotor in alternator is to produce main magnetic field, it is constructed by thin laminations in order to reduce eddy current losses ↗. Magnetic poles on the rotor are of two types which are termed as salient pole rotor and non-salient pole rotor.

Salient pole type rotor consists of large number of projecting poles mounted on a large circular magnetic wheel which is fixed to the shaft of alternator. It is also known as projected type poles because the poles are projected out from the surface of rotor core. 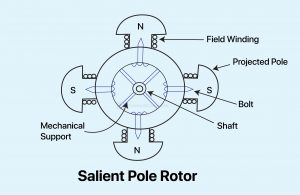 Construction of salient pole type rotor cannot be made strong enough to withstand mechanical stresses due to which salient pole machine cannot run at higher speed. Hence salient pole rotors are generally used in medium and low speed alternators with having a speed i.e.(120-1500 rpm.)

Cylindrical pole rotor or non-salient type rotors are smooth cylindrical in shape having number of parallel slots on its outer periphery. Each of the slots carries different number of turns and produce sinusoidal flux when excited. 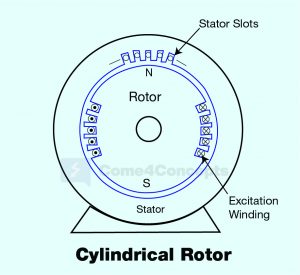 Cylindrical pole rotor has mechanical robustness since they are made up of solid steel. Moreover, they are generally used in high speed alternators having a speed of (1500-3000 rpm) due to their robust construction. In order to read the full difference between salient and non salient pole rotor, kindly read the following article :

As in any other machine, Alternator has two types of windings which are termed as Armature winding and Field winding. These windings are important to be known for better understanding of alternator function.

Field winding applies to the winding which produces main magnetic field in a machine. In the case of Alternator, field winding is applied to the rotor (rotating part) of the machine.

Armature winding applies to the winding where main voltage is induced in the machine. In Alternator, armature winding is applied on the stator (stationary part).

DC power is supplied to the field circuit of rotor to produce main magnetic field in the machine. Armature (stator) coils are stationary and they are placed on top of the field winding. When rotor is made to rotate by the prime mover, magnetic field produce by the rotor field coils also rotates (since rotor is moving). The rotating magnetic field cuts the stationary armature coils places around it and induces electromotive force (emf) in the stator windings of alternator by the faraday law of electromagnetic induction. 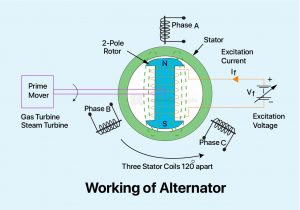 Emf induced in the armature coils is alternating since the magnetic field produce by the rotor field current is rotating. Hence rotating magnetic field induces an AC voltage in the stator windings. The voltage induced is then supplied to the electrical loads. This is how alternator (AC generator) works.

Why Alternator is also known as Synchronous generator?

Alternator is also known as synchronous generator since it is driven at synchronous speed in order to produce AC electrical power of the desired frequency. Let me explain.

Frequency of the induced emf in the armature conductors of three phase alternator depend on the speed of rotation of rotor and magnetic poles on the rotor. Mathematically, it is written as:

F= Frequency of the output current.

P= No. of magnetic poles(constant).

N= speed of rotation of rotor.

Once the designing of synchronous generator is done and it is installed, number of rotor poles(p) is fixed, hence poles could not be changed.

Since alternating current runs at fixed desired frequency (60 cycles per second in America and generally 50 cycles in other countries), so the frequency of the output current is maintained by controlling the speed of rotor. Hence alternator rotates at synchronous speed in order to produce AC power of the desired frequency. That’s why alternator is also known as synchronous generator.

1 thought on “How does an Alternator Works?”